Patsy Meyer is an Emmy-nominated singer, songwriter, and percussionist. Meyer’s unique style blends soulful vocals, jazz, spicy Latin/world percussion, and a vibrant stage persona. Patsy grew up in N. Ky and was well-known in the Cincy music scene during the 90’s before moving to LA in 2001. The Cincinnati Post’s review of her show opener for Kenny Rankin, proclaimed her “the finest female voice in the territory.”

During her 17 years in Los Angeles, Patsy divided her time between writing songs for TV and film, appearing in clubs throughout Southern California with her own band, and touring as a backup vocalist/percussionist. Her credits include performing worldwide with major recording artists including the legendary Patti Austin, Peabo Bryson, Norman Brown, Jeff Lorber, Marion Meadows, Alex Bugnon, Chante Moore, Roger Smith and Paul Taylor in major venues around the country including LA’s own Hollywood Bowl. Her “killer chops” were cited by The L.A. Music Scene, whichranked her among “the hot new breed of vocalist/percussionist/songwriters.”

As an artist, Meyer has also been the opening act for Spyro Gyra, Chuck Mangione, Lisa Loeb, Ambrosia, War, Ken Navarro, Warren Hill and The Rippingtons. In Norfolk, a radio station called her “the most impressive vocalist and percussionist to emerge since Sheila E. hit the charts." Harvey Coleman, director of Detroit’s Jazz on the River concert, after catching Meyer’s performance: “I was overwhelmed. She engaged the entire audience. We felt like we were all on stage together.”

Patsy also carved out time to release three albums, including “Don’t Stop Now”featuring Tom Scott and Russ Freeman,  “Don’t Get No Better”, a collaboration with Diane Shure’s sax man, Patrick Lamb, and the 2017 “Retro Archives”. As a songwriter, Meyer has been nominated for an Emmy three times in the Best Original Song category, and more than 80 of her songs have been used in film and TV. Her voice has been featured on commercials for Fortune 500 companies, including AT&T, McDonald’s and Walmart. She is a Remo drum circle facilitator and former teaching artist for the Pacific Arts Center.

Since 2018, Meyer and husband, composer/producer John Henry Kreitler, divide their time between KY and Puerto Vallarta, MX. Patsy is currently performing in both the US and Mexico and working on her fourth release, which she describes as “more soulful vocals and spicy percussion housed in a more traditional jazz format”. 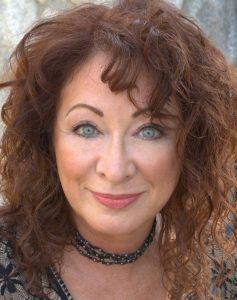